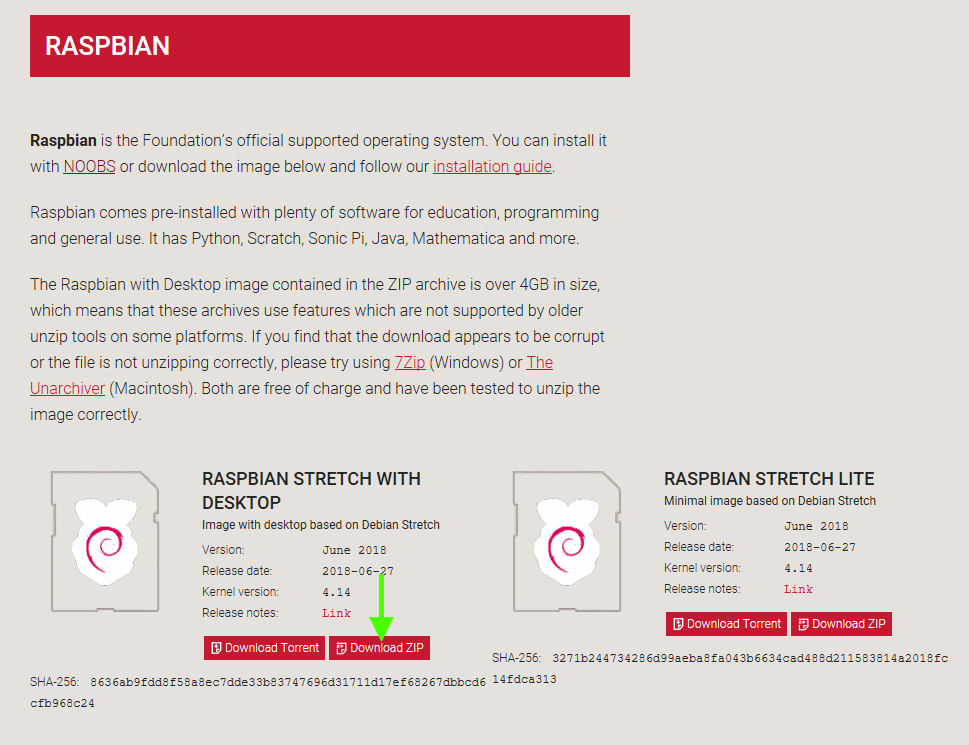 This tutorial shows you how to install Raspbian on a empty microSD card. After following this tutorial, the operating system will be installed on your microSD card and the card will be ready to be inserted in your Raspberry Pi.

Be sure to have prepared following components:

First we have to download the latest version of Raspbian. Raspbian is the standard operating system used for the Raspberry Pi. It is linux based and you can download two versions:

You can download for free an image of both versions of Raspbian on the official Raspberry Pi web page: http://www.raspberrypi.org/downloads/raspbian

As shown in the figure above, we select the full desktop version. It’s the easiest way to start using the Raspberry Pi.

Once downloaded, unzip the file.

The result should be an image file as shown in the figure above.

If you already have Etcher or a similar tool on your PC, you can skip this step.

Because the file is an image file we need a tool like Etcher to put the image on the microSD card.

You can download Etcher for free on the official site: http://etcher.io

Select your operating system and follow the installation procedure.

Flashing the image on your microSD card is quite easy. Just do it in these 3 steps:

1: Select the image file in the folder where it has been unzipped.

2: After having introduced your microSD card in your PC, select the drive referring to the card.

3: Click on the Flash! button and wait until the process finishes.

At the end of the process, you’ll probably have a message asking you to format the drive:

This message comes because Windows has difficulties to recognize the linux partitions. Just click on cancel.

Just close Etcher and remove your microSD card from your computer.

Congratulations! You just made you microSD card ready to be used on your Raspberry Pi.